The Lagotto is a sturdy, small to medium height, hairy dog with a rustic appearance. They are very good watchdogs and make great companions.
This breed is well trained for locating truffles hidden in the ground. With the hunting instinct suppressed, the Lagotto is able to effectively focus on locating the truffles aided by its highly tuned sense of smell. Thanks to its natural intelligence and ease of training this breed is destined for locating truffles. 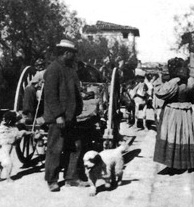 The Lagotto Romagnolo is a rural dog with its ancestry reaching far back into Italian history. It is an ancient breed which has miraculously survived until today.
Archeological sites located primarily in Northwest Italy, indicate the Lagotto evolved from a breed of small water dogs with curly hair.

The Lagotto is first identified in history during the time of the Etruscians in the 7th century BCE. Drawings found in the Etruscan city of Spina (located near present Ferrara) clearly portray scenes of hunting and fishing involving a dog which is very similar to today’s Lagotto.

After the disappearance of the Etruscan civilization, we continue to find evidence of this water dog both in the Roman and Medieval periods of history. The evidence primarily locates the Lagotto along the East coast of the Italian peninsula, raging from Ravenna in the South, through Comacchio, the Venice lowlands, and North to Friuli and the Istria cape.

Located in the wedding chamber of Ducal palace in Mantova is a fresco by Andrea Mantegna dating to 1456. On the fresco’s left side is a scene depicting a dog identical to today’s Lagotto laying at the feet of Marquis Ludovic III Gonzaga.

Post 16th century we continue to find descriptions and drawings of hairy dogs in literature.
Thanks to itd thick, hairy coat, the Lagotto was able to spend hours in the water in any weather conditions.
The name Lagotto derives from the dog’s original purpose. In the local Romagna dialect “Cán lagót” means “hairy water dog”.
Originally the Lagotto was used as a guard dog, protecting dwellings and real property. Towards the end of the 19th century, the Lagotto began it’s training as a locator of truffles. Ease of training, combined with an acute sense of smell, quickly turned the breed into an excellent locator of truffles.
By 1920, the Lagotto was known in: Romagnolo Apennines, Valle del Senio and Valle del lamone, however principally in Valle di Santerno. Despite this renown there was little interest in establishing the dog as a pure breed.

As late as the 1970s, a group of Romagnan enthusiast (Quintino Toschi, Prof. Francesco Ballotta, Dr. Antonio Morsiani and Lodovico Babini) decided to establish this dog as a recognized breed. In 1988 they established C.I.L (Club Italiano Lagotto). In 1995 after many long years of work, the breed was officially recognized by the F.C.I. Today the Lagotto breed is very popular abroad. There is rapid growth in the number of Lagotto puppies in Great Britain, the USA, Switzerland, Finland, Sweden and the Netherlands.
Since 1997 the U.M.LAG (World Union of Lagottos Clubs) has overseen all international Lagotto clubs.

BRIEF HISTORICAL SUMMARY: Ancient breed of retrieving water dogs in the lowlands of Comacchio and marshlands of Ravenna. During the centuries, the great marshlands were drained and turned into arable land. Subsequently the Lagotto changed from being a water dog to an excellent dog for searching truffles in the flat open country and in the hills of Romagna.
GENERAL APPEARANCE: Small to medium-sized dog, well proportioned, powerfully built, of a rustic appearance, with a dense, curly coat of woolly texture.
IMPORTANT PROPORTIONS: The length of the head is 4/10 of the height at the withers. The dog is nearly as high as long (square).
The length of the skull should be slightly more than 50 % of the total length of the head.
The length of the muzzle is 2/10 less than that of the skull (44 % to 56 %).
The depth of the chest is less than 50 % (about 44 %) of the height at the withers.

BEHAVIOUR / TEMPERAMENT: A natural gift for searching and its very good nose has made the breed very efficient in truffle searching.
The former hunting instinct has been eliminated, hence his work is not distracted by the scent of game. The Lagotto is tractable, undemanding, keen, affectionate, very attached to his owner and easy to train. He is also a very good companion and an excellent watch-dog.

HEAD: Viewed fom above trapezoidal in shape and moderately broad; the upper longitudinal axes of the skull and the muzzle diverge slightly.

CRANIAL REGION:
Skull : Wide at the level of the zygomatic arches, and as long as wide. Viewed from the side, from occiput to stop, the skull should be longer than the muzzle. It is slightly convex and tends to flatten out at the back skull. Frontal sinuses well developed, superciliary arches marked, medio-frontal furrow pronounced, occipital crest short and not very developed, supraorbital fossae slightly marked.

Stop : Not too pronounced.

FACIAL REGION:
Nose : Large with wide open and mobile nostrils. Naso-labial line strongly pronounced. Viewed in profile, the nose continues on the same level as the muzzle and protrudes very slightly from the front edge of the lips. The colour ranges from light to dark brown, depending on the colour of the coat.

MUZZLE: Fairly broad, a little shorter than the skull (ratio : skull 56 %, muzzle 44 %), its depth being only slightly less than the length. It is slightly wedge shaped, with a moderately flat front face. The nasal bridge has a straight profile.

LIPS: The lips are not too thick, they are rather tight, so that the lower profile of the muzzle is determined by the mandible. They are covered with a long and rather bristly moustache. Viewed from the front, the lips form a wide semi-circle. The colour of the edges ranges from light to dark brown.

EARS: Medium-sized in proportion to the head, triangular with rounded tips; their base is rather wide; they are set just above the zygomatic arches.

Hanging at rest or slightly raised when the dog is attentive. If pulled towards the nose they should reach the muzzle at 1/4 of its length. On the ears, the hair tends to show looser curls, but remains very wavy. No short hair on the ears. The inner part of the auricle is also covered with hair.

NECK: Strong, muscular, lean, of oval cross section; well set off from the nape and absolutely free from dewlap. Topline slightly arched. In males the perimeter of the neck can reach the double of its length. The length of the neck is a little less than the total length of the head.

BODY: Compact and strong; as long as the height at the withers.
Topline: Straight from the withers to the croup.

Withers: They rise above the level of the croup; the highest points of the shoulder blades are not too close, but quite high set and wel laid back.

Chest: Well developed, reaching down to the elbows. Although fairly narrow in front, from the sixth rib the chest widens backwards.

Underline and belly: Long sternal section in form of a straight line; the following tuck-up is only slight.

TAIL: Set on neither too high nor too low; tapering towards the end. When hanging, it should barely reach the hocks. At rest carried scimitar like; when attentive decidedly raised. When working or excited can be carried over the back, but never curled.

Generally: Vertical, seen from the front and in profile.

Shoulder: Shoulder blades long (30 % of the height at withers), well laid back (52-55°), muscular, strong and closely attached to the chest, but moving freely. The scapulo-humeral angle ranges from 110° to 115°.

Upper arm: Muscular, of thin bone structure, as long as the shoulder blade; its inclination to the horizontal ranges from 58-60°.

Elbows: Well attached to the chest wall, but not too tightly; covered with thin skin; parallel to the median sagittal plane of the body as are the upper arms. The point of the elbow is located on a vertical line lowered from the back end of the scapula to the ground.

Forearm: Perfectly vertical, long (36 % of the height at withers), with compact, strong bone of oval cross-section).

Carpus: Viewed from the front in a vertical line with the forearm; fine, robust and mobile; pisiform bone markedly protruding.

Pastern: Rather less thick and of finer bone compared with the forearm, mobile; seen in profile, it forms an angle of 75° to 80° with the ground.

Generally: Vertical and parallel, powerful, well proportioned to the size of the dog.

Upper thigh: Long (35 % of the height at withers), with clearly separated and visible muscles. The axis of the femur has a distinct inclination of 80° to the horizontal line. The coxo-femoral angle ranges from 105° to 110°. The thigh is paralell to the median plane of the body.

Lower thigh: Slightly longer than the upper thigh (36 % of the height at withers), well boned and muscled, with marked muscular groove. Its inclination to the horizontal ranges from 50° to 55°.

Hock joint: Wide, thick, lean, with clear-cut bone; parallel to the medium plane of the body; the tibio-metatarsal angle is ca. 140°.

GAIT / MOVEMENT: Walk regular, trot energetic and brisk, gallop for short periods.
SKIN: Close fitting all over the body, without wrinkles, thin, with sparse subcutaneous tissue. Pigmentation of mucous membranes and of pads ranges from light to dark and very dark brown.

HAIR: Of woolly texture, somewhat rough in surface, forming tightly curled, ring shaped curls with the undercoat shining through. Curls must be evenly distributed all over the body, except on the head, where the curls are less tight, forming well-furnished eyebrows, whiskers and beard. Even the cheeks are covered with dense hair. The topcoat and specially the undercoat are water-proof. If not clipped, the hair tends to become felted; therefore a complete clipping must be performed at least once a year. Felted topcoat and undercoat must be removed periodically.

FAULTS: Any departure from the foregoing points should be considered a fault and the seriousness with which the fault should be regarded should be in exact proportion to its degree.

Any dog clearly showing physical or behavioural abnormalities shall be disqualified.
N.B.: Male animals should have two apparently normal testicles fully descended into the scrotum.